We're down to the wire. Early voting ends tomorrow and Election Day is only a few days away. Haven't voted yet? Go now or ensure you have a plan to get to a poll tonight, tomorrow, or Tuesday. Return your absentee ballot today. Already voted? Call your friends. Make sure they've voted or are planning on it. Make calls. Knock doors. Let's bring it home.

Ok, I lied: one more bit about Kavanaugh. Who's his replacement on the DC Circuit Court going to be? Here's one potential nominee. Washington Examiner

Ah, nothing like casual racism from Hillary Clinton that has been largely ignored by the mainstream media. No Democrat was asked about her comments. What did she say? Find out here. The Daily Wire

"I can't wait for tax season!" said no one ever. This year might be different. The GOP-led tax reform signed into law by the President could result in much larger tax refunds. Yahoo Finance

The final economic report before the election revealed good news: the robust economy added 250,000 jobs and wages and salaries grew by their largest amount since 2009. Associated Press

Obama did his best to try and close Gitmo, the high security facility in Cuba that houses suspected terrorists. Obama traded five of them for deserter Bowe Bergdahl. Take a wild guess where they are now. Military Times

State Treasurer Dale Folwell has quietly been having success saving the taxpayers money. Now, he wants to bring additional transparency regarding the state health care plan that could save $300M of your tax dollars. Read on: WRAL

A story from Monday stated that the voting numbers might not add up to a blue wave. That does not mean complacency; that means pour it on and run it up. The News & Observer

"This House district will determine who controls Congress!" One can make that argument for just about any race. That being said, Rep. Holding jumped out to a 9-point lead in a new poll. What's going on in the Thirteenth with Rep. Budd and Pelosi's favorite liberal mega-funder Kathy Manning? Carolina Journal

Democrats love to complain about big money, but Roy Cooper certainly isn't shying away from Tom Steyer, the environmental extremist that is hell-bent on impeaching Trump. Cooper openly met with him just this week. Not a good story a day after former Democrat Governor Jim Hunt gave $325K to the NC Democrat Party, which turned around and donated $350K to his daughter running against Bill Brawley. WRAL

When people think tech jobs, thoughts usually turn to Silicon Valley. Thanks to the pro-growth reforms of the Republican-led NCGA, Raleigh has quietly climbed to the second-best place in the country for tech. Crunchbase News

Anti-Second Amendment groups like Michael Bloomberg's Everytown or Mom's Demand continue to push gun control after school shootings. Seems they don't care that school shootings have decreased substantially despite the increased attention on social media. Regardless, Rep. Craig Horn gives some details about how the Republican-led General Assembly can help with the safety of our children. WFAE 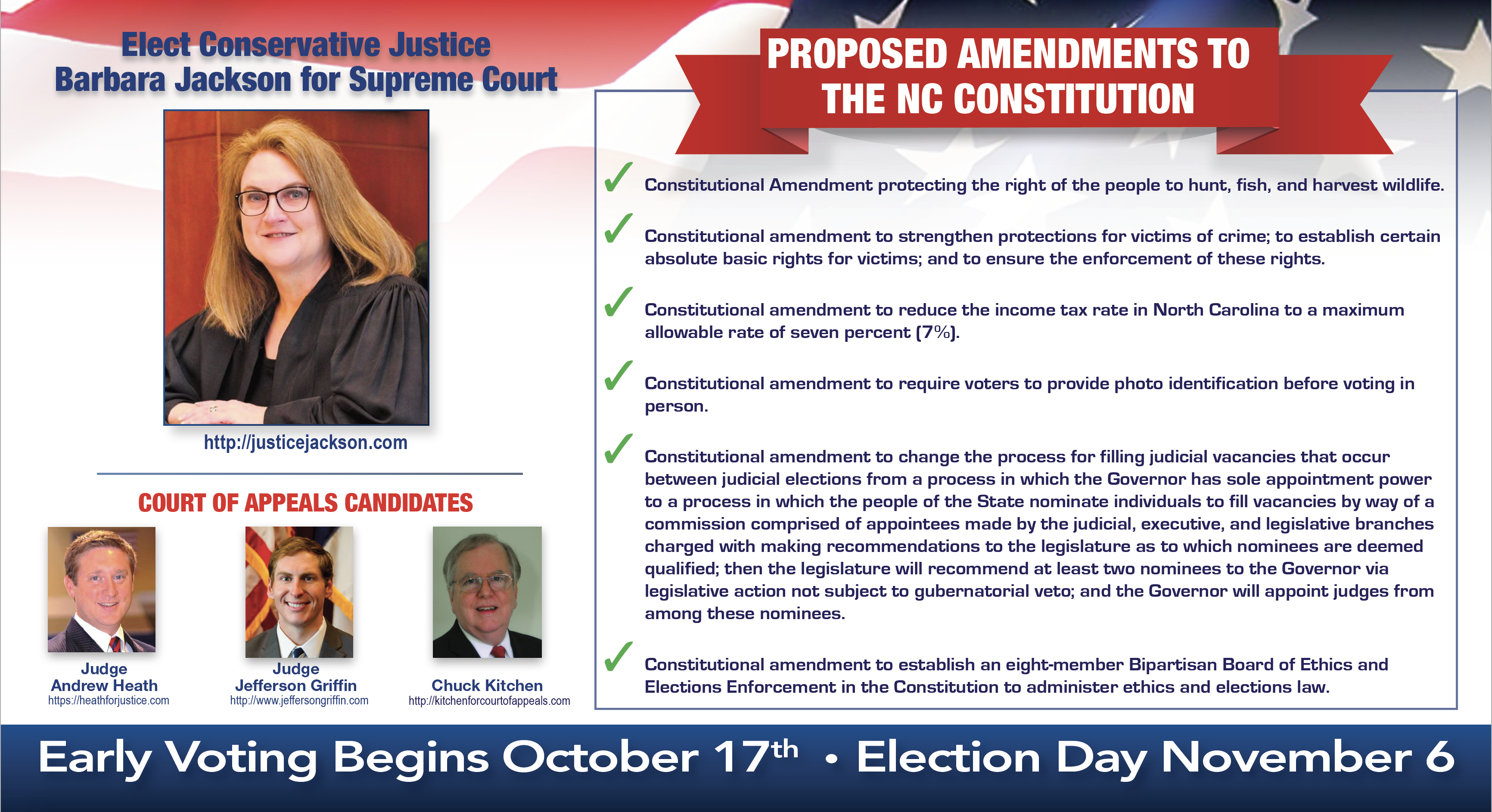 As a reminder, these are the only endorsed judicial candidates for statewide election. Chris Anglin is a Democrat masquerading as a Republican and is not endorsed by the NCGOP.

All six constitutional amendments have been endorsed by the NCGOP.

You can can learn more about the judicial candidates here and the amendments here.

Last Saturday door-knocking opportunity with quite a few candidates! Here's one with Nelson Dollar: https://www.facebook.com/events/313151336190547/

The NCGOP in conjunction with the Holding campaign and the Wake County GOP will be holding a watch party at the Double Tree Brownstone Harvest Grille. Address is 1707 Hillsborough Street. Come on down and watch the returns starting 7:30pm!

As of today, we're 4 days away from Election Day. Early voting ends tomorrow. If you received an absentee ballot and have yet to return it, do it now. An absentee ballot will only count if it is postmarked by November 6 and returned to the NCSBE by November 9. If you were unable to register to vote, you can still do so at the polls. GO VOTE.

If you're registered to vote or to print out your sample ballot, go here: https://vt.ncsbe.gov/RegLkup/

To use the unique VOTE.GOP for NC and find an early voting location or your Election Day polling place, go here: https://vote.gop/?utm_source=105953

This is it folks. Make it count.