As the second round of the NFL Draft kicks off tonight (I'm sure some of you were screaming or applauding your TV last night during the first round), early voting ends in the 3rd District as the 9th District gets going. I'll add in links for early voting sites in the 9th at the end. If you're in the 3rd, Election Day is Tuesday. Go vote at your normal precinct location like you would for any other election. If you're not in the 3rd or 9th but know people who are, remind them they need to vote!

Sen. Elizabeth Warren introduced her plan to eliminate the growing student debt by essentially forcing you to subsidize loan forgiveness for anyone who makes less than $250K per year. There are better ways to combat this reckless and unfair policy while still addressing student loans, and here's one. National Review

Republicans have been warning people for years about entitlement reform. Former Rep. Paul Ryan endured a lot of flak in the 2012 Presidential race when discussing it. It should've happened then because now the Social Security trust fund AND Medicaid will be insolvent by 2035. The Wall Street Journal

The partisan talking heads will continue to address the Mueller Report and how it pertains to President Trump, but there's another angle to this report: how does this look for the Obama admin? CNN

This story is from last week, but it's an interesting read. First, the reality: until Republicans have a veto-proof majority in the Senate and re-take the House, Obamacare isn't going anywhere. Democrats were able to ram it through because they had 60 seats. We can't repeal it until we have the same, so what do we do in the meantime to chip away at this bad law? The same way you eat an elephant: one bite at a time. National Review

For years, the reporting system for how school funds are spent has been labeled as opaque at best. Republican State Superintendent Mark Johnson introduced a new website yesterday to address transparency concerns from his Democrat predecessor. Check it out here: WRAL

Speaking of education, May 1 is when the far-left NCAE descends upon the NCGA to push for the liberal agenda of the NCDP. They aren't there for the kids or the teachers; They're coming to help themselves and even liberal editorial boards agree. Star News

Last Thursday, Cooper vetoed the Born Alive Abortion Survivors Protection Act. In doing so, he alienated the six Democrats who voted for the bill, all of whom are African-American and represent rural districts. So far, those six are planning on voting to override Cooper's veto. The Laurinburg Exchange

In 2017, Roy Cooper appointed former Democrat Mayor of Greenville Allen Thomas to the Global TransPark in Kinston as Executive Director. Now running for the Democrat nomination in the 3rd District to replace the late Rep. Walter Jones, Thomas is coming under scrutiny following a scathing audit from Democrat Auditor Beth Wood. Carolina Journal

No floor votes in either chamber this week.

Democrats bowed to the campaign cash of union groups, introducing a bill to overturn NC's 60-year-old ban on collective bargaining. Sen. Wiley Nickel, the former Obama admin staffer, has been desperately trying to make the ban into a race thing, frequently calling the ban as something from the Jim Crow era. The budget proceedings are well under way, so look for news stories in your local paper about the initial offering from the House (it starts there this year). Remember, nothing in it is final UNTIL it passes both chambers and (most likely) goes to conference, where it will have to pass both chambers again. Don't like something in it or want to see something added? Find your representatives and contact them. They work for you, after all.

Bad Bill Of The Week: There are varying opinions regarding climate change and man's impact. Regardless of where one stands, it's clear that this subject should be reserved for students with at least a basic knowledge of geography, chemistry, biology, and atmospherics that you don't typically hit until late middle or high school. Radical environmentalist Democrats are determined to change that by teaching kids in K-5 about climate change. No need to ensure these kids can read, write, or understand basic math. There are many reasons why school choice is exploding in popularity, and this bill is one of them: HB 965

Want to request an absentee ballot instead? No problem. Go here: https://www.ncsbe.gov/Voting-Options/Absentee-Voting

With the 9th District early voting going on, there's still an opportunity to get to know the candidates. The Matthews/Mint Hill Republican Club will be holding a candidate forum on Tuesday, April 30th from 6:30 to 8:30pm. Details here: https://www.facebook.com/events/583493772135147/

Last few District Conventions are this weekend! Full schedule is below: 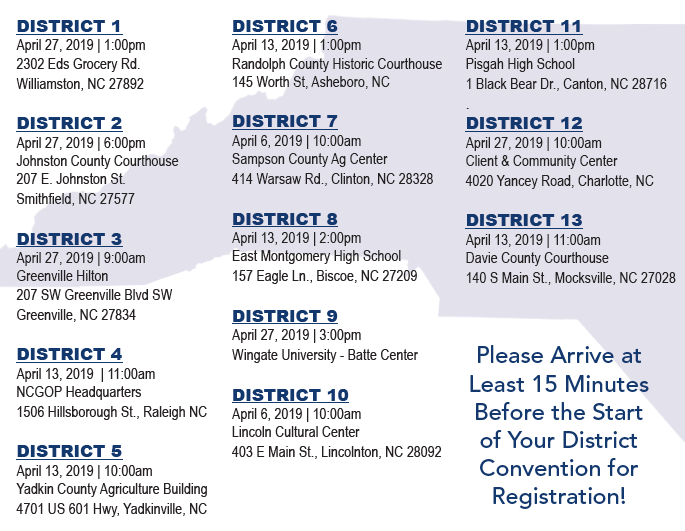