We're now just ONE WEEK away from the Convention, and if you haven't registered, your time is running out. A link to register is at the bottom. If you're in the 3rd District, absentee ballot voting has started for the runoff between Drs. Perry and Murphy. On the other side of the state, Dan McCready had an awful week with some bad headlines, including a poll that showed he's down four points against Sen. Dan Bishop. Important note about that poll: Republicans are up 11 in the generic ballot. That's good news, but not enough for volunteers to get complacent. Pour it on and let's make that 4-point lead double digits.

The last couple Recaps have mentioned the big financial advantage the RNC has over the DNC as we approach the buildup for the 2020 cycle. To help train a massive grassroots army to support Republicans up and down the ballot, the RNC introduced a new initiative to do just that. Fox News

As mentioned last week, Democrats are getting ready to tear each other apart to appease the far-left portion of their base. Former VP Joe Biden is still the frontrunner, and someone dropped oppo on him last week. Someone dropped more this week. CNN

Democrats on the national level are running on getting rid of the Electoral College while state-level Democrats are trying to pass a popular vote compact; Both are endorsements of direct democracy, also known as mob rule. Let's go down this road for a sec: what would no Electoral College look like? USA Today

Republicans and the President's administration continue to work to find ways to secure the southern border via physical and technological border security measures. Immigrants and asylum seekers continue to arrive in droves. Last month, a record was set for immigrants apprehended after crossing the border illegally in a single day: 424. That record was broken this week. How many? NBC

AOC's protege Dan McCready did not have a good week. During the campaign last year, McCready publicly denounced outside spending, but it turns out that despite his statements he got plenty of outside help, mostly from Pelosi-connected PACs. McCready has also stated he would be tough on China. Take a wild guess what his solar energy company is doing? Fox News

Been saying this for a few weeks, but the House has already passed their version of the budget and the Senate has been taking it up this week. It passed out of the Senate yesterday afternoon and there are some significant differences between the two budgets, which means it goes to conference. Before it does that, read up on what was in the Senate budget. Carolina Journal

With the highly-publicized school shootings over the past couple years, North Carolina Republicans have worked tirelessly to come up with solutions that don't include taking away your Second Amendment rights. One solution they came up with is an app that allows students and teachers to report safety concerns anonymously. WTVD

This story keeps getting worse and worse for Roy Cooper. The decision to fire Kim Strach by Cooper's political arm was the story from last week. Check out this update and interview with Republican Board member Ken Raymond. WBTV

Both chambers are out on recess.

As mentioned, the Senate passed their budget today. It will be sent back to the House for concurrence. Given the significant differences between the two bills, expect a vote to not concur and a conference committee will be established to hammer out a compromise. A guarantee is that it will not include Medicaid expansion; Cooper's method for expanding it is flawed. After that, no matter how big the teacher pay raises or increased education spending, it's a good bet Governor Cooper will veto it.

While the Senate has been working budget, the House has been busy passing mostly bipartisan legislation, including a bill to help with rural broadband development and addressing voter ID. Additionally, the House has scheduled the veto override for the Born Alive Abortion Survivor Protection Act for June 5. If you haven't sent any letters to the editor of your local paper or made your voice heard with your Representative no matter their party, now is your time. Who's your Rep? If you don't already know, find out here.

A debate between the two candidates for the Republican nomination to the 3rd Congressional District, Drs. Joan Perry and Greg Murphy, will take place this Monday June 3rd at Pitt Community College in Winterville, NC, in the Walter & Marie Williams Building, Room 111. It begins at 6:30pm.

The day before the Convention, there's a rally in support of Justice Newby! Invite is below if you'd like to attend. 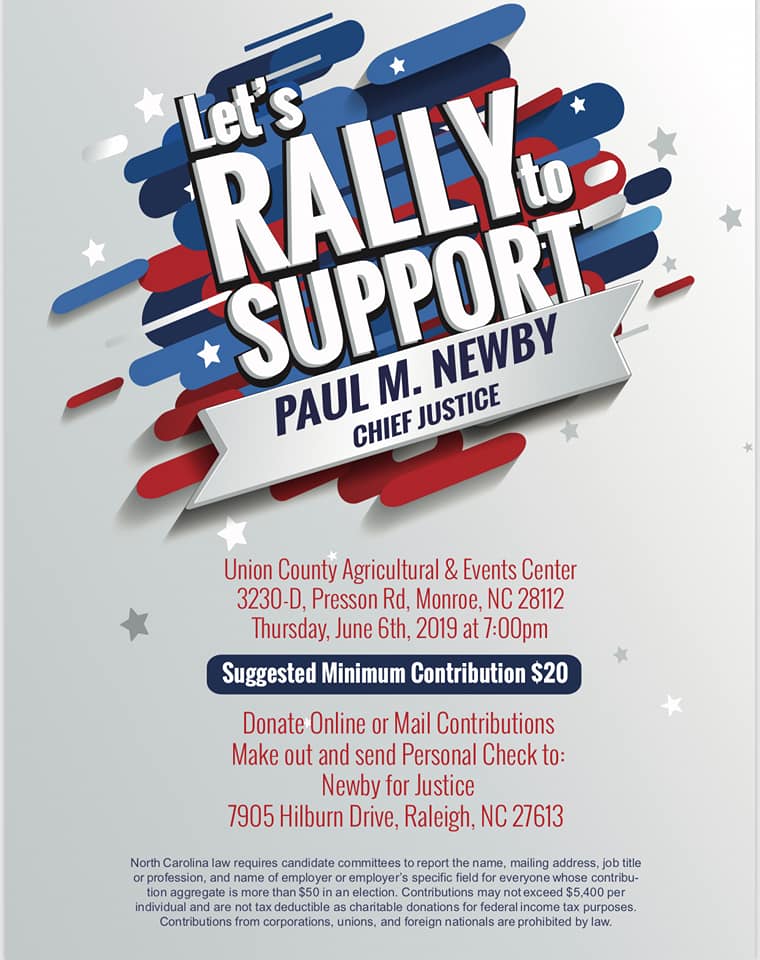 On June 7, the Friday night at the Convention, we'll have our first annual Cigar Caucus event! Everyone is welcome, so come out and enjoy: Cigar Caucus

There is still time to register for the Convention! Do so here: 2019 NCGOP State Convention

Speaking of the Convention, a new Chair and Vice Chair will be elected to lead the NCGOP. Following the election, make your way to the NCGOP HQ in Raleigh to get to know them with a unity reception. Details are here: Unity Reception