Man, what a week. Plenty of free ads for Republicans from the content of the two Democrat debates that were absolute train wrecks and SCOTUS handed down a ruling that preserves state sovereignty. The citizenship question is off the Census for now. The NCGA advanced their budget that addressing education funding, and Cooper promptly vetoed it without reading the bill. But you probably know all that. What did you miss?

Democrats continue to move to the left regarding health insurance. It's not difficult to message against the disastrous single-payer approach to universal health coverage: higher taxes, fewer choices, less access, long waits, etc. However, is there a flaw in how we approach messaging against single-payer? National Review

The Tax Cuts and Jobs Act pushed through by Congressional Republicans and the President has helped usher in the current economic environment, i.e. that the nation's economy is on fire, and saved an average of about $1200 per family. Leading Democrat candidate Joe Biden wants to raise your taxes if he becomes President. Fox News

Democrats have a fundraising platform called Act Blue that helps them in the online donation game and allows a one-stop shop to donate to numerous candidates. Republicans have been working on a platform called WinRed to counter Act Blue. This platform has been discussed in past Recaps, but it finally went live this week. POLITICO

Democrats frequently point to some of the Nordic countries like Denmark or Sweden as models for democratic socialism when they get called out for the abysmal failures of socialism in Venezuela and the USSR. How do you counter that talking point? The Washington Post

Chairman Whatley sat down with the North State Journal to go over his plans for the next two years. Check out:

Unsurprisingly, Cooper vetoed the $24B state budget and is holding teacher pay raises, school construction, and infrastructure needs hostage over one item on his far-left wish list. With talks expected to continue, what happens to the state government in the meantime? Winston-Salem Journal

Cooper's incompetence when it comes to hurricane relief funding is well-documented and will be a central issue for the 2020 gubernatorial campaign. Stories like this one that will continue to damage Cooper, so keep pounding the issue. News & Record

State Treasurer Dale Folwell has been an excellent steward of the taxpayers' money, continuously finding ways to save additional dollars. He's been working really hard on the state health care plan, and a new group of physicians are joining in on his project. Carolina Journal

Nancy Pelosi got hosed, and it was all thanks to Mitch McConnell. The House passed a bad bill regarding humanitarian aid for the border crisis, so McConnell shot it down and then the Senate passed their own version 84-8 without the bad provisions in the House bill. After a revolt from the centrist Dems in the House, Pelosi had no choice but to usher it through. The House also passed a sweeping elections bill backed almost only by Democrats, and all of your current Congressional representatives voted accordingly. Like most of the bad bills coming from the socialist wing of House Democrats, McConnell promised the legislation will die a slow, painful death in the Senate.

One of the biggest bills in Congress passed the Senate - the National Defense Authorization Act. It's the military funding bill usually passed on a bipartisan basis each year. It's considered the most grueling markup in Congress, lasting up to 18 hours. Both Senators Tillis and Burr voted for the legislation in an 86-8 approval.

Certificate-of-need laws have been a part of discussions for years but legislation hasn't really gone anywhere - until this year, and a bill is advancing in the Senate with bipartisan support. The House moved an anti-sanctuary city bill to the Senate, aimed at forbidding counties from enacting sanctuary policies for illegal immigrants. Obviously, the biggest bill passed this week was the budget, which Cooper promptly vetoed. In doing so, he leaves teacher pay raises, education infrastructure funding, and raises for state employees in limbo because of one wish list issue that doesn't accomplish what he thinks it will. Read the budget breakdown here.

In Durham County, there's a new chapter of Young Republicans starting up! Head over to their inaugural meeting on July 11th: Durham County YR Meeting

The East Wake Republican Club is holding their annual Red, White, & BBQ event on July 13th! This is always a fun event and has some star power in terms of candidates attending, so get your tickets here: Red, White, & BBQ

I said that I would reserve this section for special instances, and this week is one of them. SCOTUS, in a 5-4 decision, correctly ruled that the federal courts will stay out of partisan gerrymandering claims and stated that the power to deal with the maps lies with state legislatures and Congress. That means one thing: Democrats are coming for the state court system. This makes the SCONC and COA races extremely important because they will be the ones handling gerrymandering claims on state legislative maps. It's extremely important that county leaders educate people NOW on who the nominees are. Use the photo below if you'd like to hand it out: 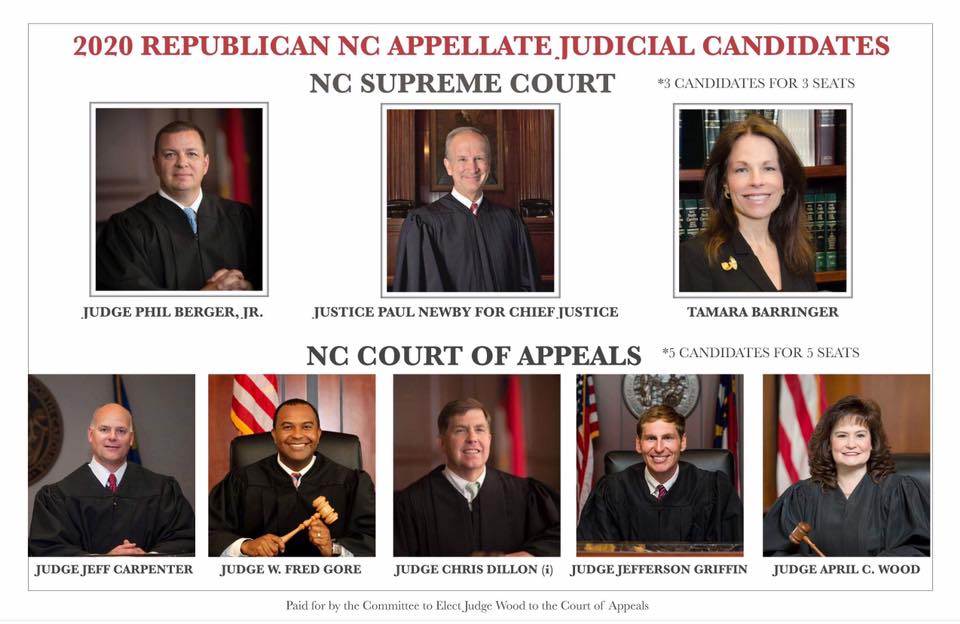 Sign up to volunteer or attend one of the Victory trainings. Don't wait. This is about the long game: we can't take back SCONC in 2020, but we can move the Court to a 4-3 minority and then make it a 6-1 conservative majority by 2022, leaving far-left SJW Anita Earls the only Democrat on the Court. Let's make it happen.