Raleigh, NC - Last Friday, WXII broke the news that Democrat J.D. Wooten, running for NC Senate District 24 in Alamance and Guilford counties, used a VA home loan program to buy a rental property. The VA loan program makes it easier for veterans to buy a home by offering special loan terms not available to the general public. To prevent abuse of the program, borrowers are required to use these loans for primary residences only, not rental, investment, or vacation homes. In his interview with WXII, J.D. Wooten has admitted to violating the residency requirement of his VA home loan.

Today, Don Carrington reported in the Carolina Journal that the NC Democratic Party has an excuse for Democratic State Senate candidate J.D. Wooten violating the terms of his zero-money-down VA home loan. And it’s a whopper:

“CJ contacted Wooten on July 29 to ask about his loan and residency issues. He passed the request to Brigid Godfrey, deputy communications director for N.C. Democratic Party. ‘J.D. is unavailable,’ Godfrey told CJ. But she offered some background information attributed to Wooten’s campaign organization...When Wooten bought the South Lindell Road home in March 2019 [with a VA loan], Godfrey said it was Wooten’s primary residence and he intended it to remain so. ‘Circumstances changed and Wooten moved in October 2019,’ she said. She said Wooten hadn’t planned to run for the Senate again.”

J.D. Wooten was already running for the NC Senate when he bought the Lindell Roadhouse with a VA loan... and he continued running (and soliciting campaign contributions) when the NC Democrat Party would have you believe he was living outside his Senate district.

According to the Democratic blog Watagua Watch, Wooten had already announced his candidacy in May 2019.

“Wooten apparently sees a way forward for making up that 6,000-vote deficit in 2020 because he announced back in May that he's in for another go at Gunn next year." 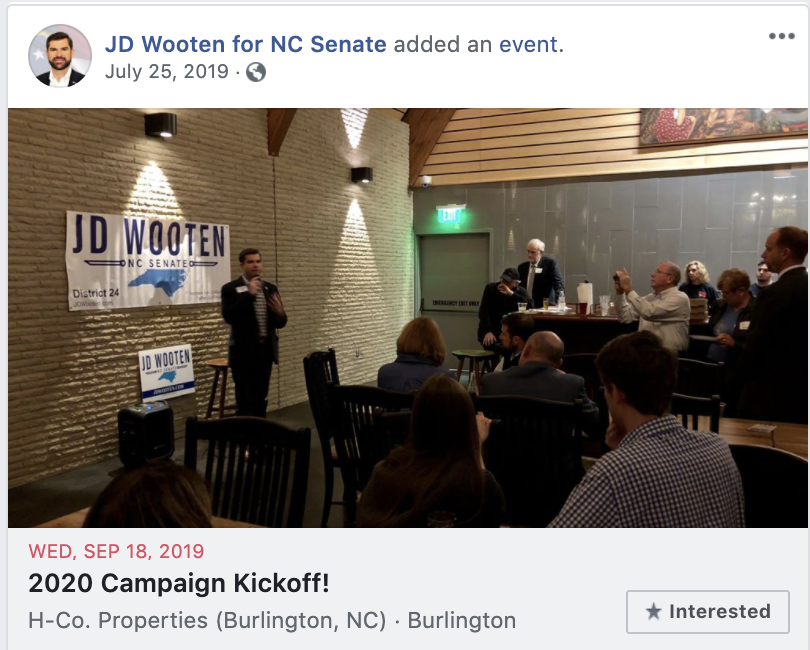 "The North Carolina Democrat Party is cravenly attempting to cover up J.D. Wooten's VA loan fraud because they know they cannot win the NC Senate without winning District 24," said NCGOP Press Secretary Tim Wigginton. "The voters of Alamance and Guilford counties deserve an explanation for the NCDP as to why this VA loan fraud and cover-up shouldn't disqualify J.D. Wooten from the race."

The race between Democrat J.D. Wooten and Republican Amy Galey is considered competitive and could determine which party controls the North Carolina Senate for this redistricting cycle.