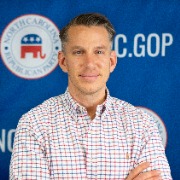 Jeff was raised on the Crystal Coast in Morehead City. He earned a BA in Political Science from the University of North Carolina and comes to the NCGOP as a valued writer and consultant in everything from politics and markets, to geopolitical risk and policy. After several productive years as a professional equities trader, he embarked on a career in politics, joining 2012 GOTV efforts with the NC Victory Fund and subsequently served in the administration of Republican Governor Pat McCrory focused on economic and workforce issues. Jeff has also served as capital reporter for the North State Journal covering state politics, a regular contributor to Carolina Journal, and as a senior policy analyst for a leading global political risk firm. His insights have been published by the likes of Fox Business Network, Business Insider, Ozy, and Seeking Alpha, in addition to media appearances on CNBC, BBC, and CNBC Nikkei. Jeff joined the NCGOP to fight for the conservative cause in October 2021.